As strong as an elephant

In November 2016, SAWO A/S – Hiab’s Danish distributor – gifted an 8-tonne granite elephant to Hiab’s new multi-assembly unit in Stargard, Poland. It was transported all the way from Denmark to Poland by the Bent-Mortensen family. We tell you why this was a gift loaded with symbolism.

Hiab’s characteristic elephant logo with its trump looking like the hook of a crane had always fascinated Flemming Christensen, the founder of SAWO A/S, Northern Europe’s largest supplier of cargo-handling equipment. In fact, he felt so strongly about the symbolism behind the elephant logo that the grey giant was made SAWO’s totem animal.

Signs of its presence are everywhere, with elephant statues welcoming guests to SAWO as they arrive at the office.

“I have around 20 elephants in my office, some made of ivory, glass, china and even wood. I even have paintings of them on the wall,” explains Ivan Chrost, CEO of SAWO.

The elephant represents strength, long life, reliability and trust, all qualities that Chrost says have come to represent a Hiab crane. Which is why, as testament to their long-standing relationship, SAWO has gifted granite versions of these elephants to Hiab offices in Sweden, Holland and Finland, with the most recent one being gifted to the Stargard unit in Poland.

Transporting this mammoth gift over 1,000 kilometres from Denmark to Poland required someone SAWO could trust without any reservation. Which is why they made the decision to have Per Mortensen and his son Jesper Mortensen of Bent Mortensen A/S take up this task. A choice, Chrost says, that is especially symbolic since the family has been using Hiab equipment for over 50 years now. 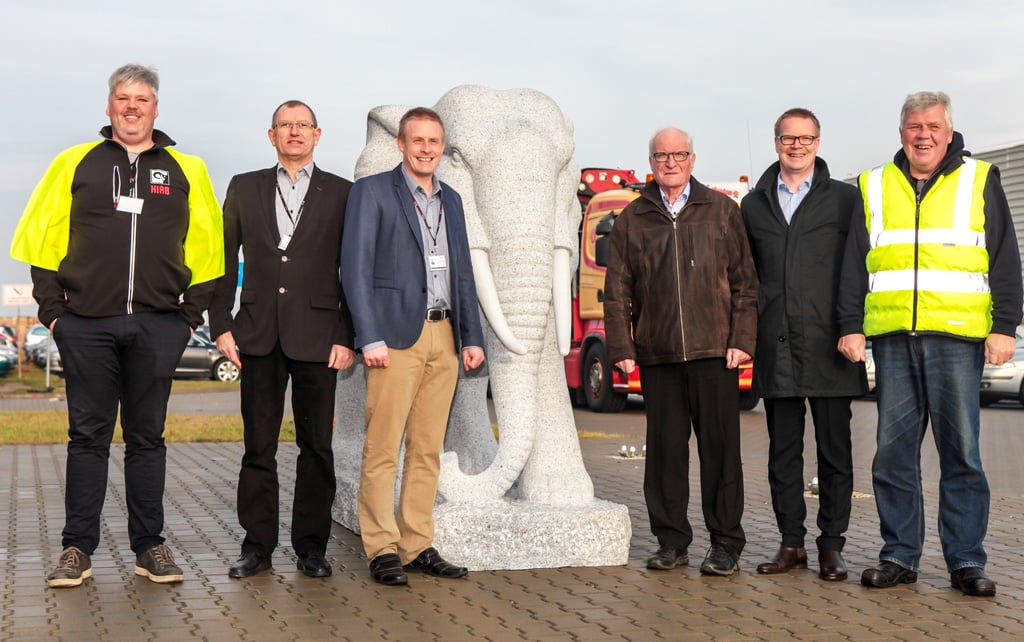 “SAWO’s relationship with the Bent-Mortensens means a lot because they are loyal customers that have stayed with us and Hiab year after year. As a company, they have been doing business with us for three generations and so are the perfect ambassadors for us,” says Chrost admiringly.

A feeling that is reciprocated by 37-year-old Jesper Mortensen, who represents the youngest generation of the Bent-Mortensen family and who has known SAWO since he was a young boy.

“We keep being loyal because we know that SAWO will always do anything they can to help us,” he says. Mortensen recalls a time when the piston rod on one of his cranes was giving him problems and he had to call SAWO in to help. “They showed up right away and fixed the problem in no time. That’s important because it’s quite expensive for us to have a vehicle stranded on the road,” he explains.

As a fifth-generation crane driver, Mortensen knew the importance of having the right equipment to accomplish this task, which is why he chose to take their biggest crane – a HIAB X-HiPro 1058. And not only was it an exciting chance for him and his father to travel to Poland and see the new facility, he also feels it was a great honor for the Mortensen family.

“To us, it was a pat on the back. It showed that SAWO appreciates us as a customer. It is an important kind of mutual respect that shows that we can rely on each other,” says Mortensen proudly.

When ‘Hiabilski’ – as the elephant was affectionately named, rolled into the Stargard ground, nearly 300 people were in attendance and watched in awe as the giant statue was smoothly and effortlessly set in place. A reminder of the strong relationship that has built up over the past five decades between Hiab, SAWO and the Bent-Mortensen family.

With all the goodwill that has been built up, Mortensen feels that the relationship will last another 50 years, saying “as long as we respect each other, I don’t see why it would ever change.”

For Hiab, the feeling is mutual and ties in firmly with its core values, which are to pioneer new products and services, while building up a reliable, caring and empowering relationship with its customers. A relationship as strong and powerful as the mighty elephant.