To improve traffic-flows and reduce pollution, local authorities are encouraging truck operators to deliver goods into the Greater London Area outside of the classic early morning and late afternoon ‘rush-hour’ period.

This creates a dichotomy: How to distribute goods outside of normal delivery hours, without disturbing local residents with intrusive noise.

The family-owned independent timber and builders’ merchant Lawsons launched its Eco Truck project in 2018, to meet this challenge and was recently nominated for the 2021 John Connell Award, which is presented by the UK Noise Abatement Society.

The Eco Truck is a 26-tonne flat-bed rigid with a HIAB loader crane powered by HIAB’s ePTO battery operated Power Pack on-board on an Iveco Stralis NP truck. The Iveco’s 7.8-litre natural gas engine produces 50% lower noise, less CO2 emissions and 99% fewer particulates than compared to an equivalent diesel engine. Compared to a conventional delivery vehicle, it’s not only cleaner but also quieter when unloading products at customer sites either in or close to residential areas. 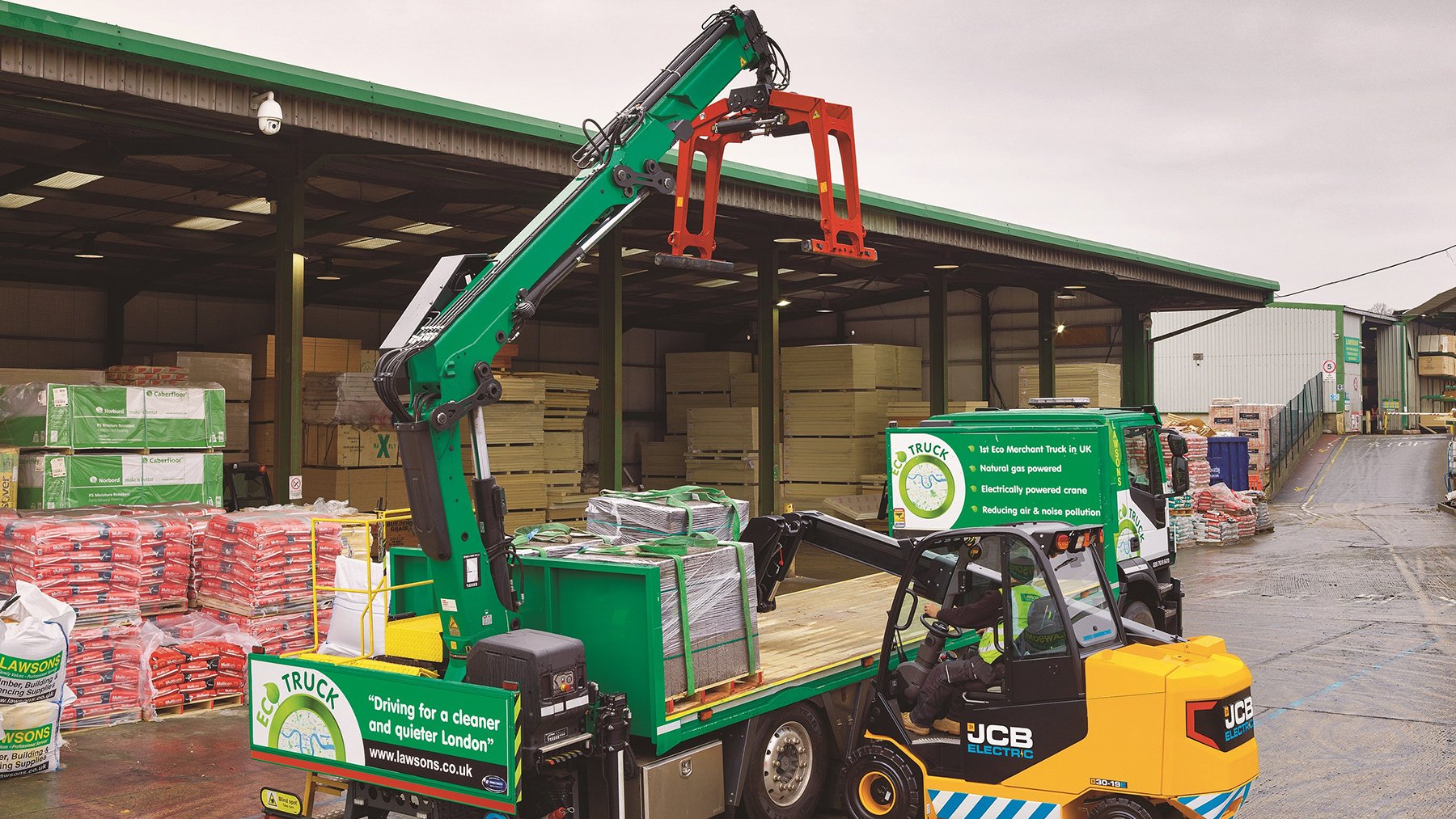 The HIAB X-HiPro 142  loader crane used to deliver goods on the Eco Truck and is powered by Hiab’s zero-emission ultra-quiet ePTO solution. On a conventional crane truck, the vehicle’s engine must constantly run to operate the crane. This creates a noise nuisance. On the Eco Truck, however, the ePTO powers the crane via a battery-pack providing near-silent operation throughout the working day. On current versions of ePTO, Hiab has reduced operating noise levels to 65dB(A), which is comparable to the sound levels of an office.

This also has a positive effect on the delivery drivers as Lawsons Transport Projects Manager David Harvey reports. Feedback Lawsons has received from the drivers is that: “We’re not fatigued because we’re not working with the constant drone of the truck’s engine running all the time when unloading. After a 10-hour shift, you really notice the noise difference.” Operating from the company’s Camden Depot in a busy part of London, the Eco Truck regularly delivers building materials into sensitive urban zones. Lawsons has a fleet of over 90 commercial vehicles operating from 17 branches in-and-around London.

David Harvey explains: “We’ve numerous customers who work within areas of London where the councils are particularly aware of noise pollution. The Eco Truck has become an essential tool for these contractors who carry out work in noise-sensitive locations. The following remark from a major client is typical of the feedback we’ve had: ‘We are members of the Considerate Constructors Scheme, and the Eco Truck helps us comply with two of the scheme’s core values of respecting the local community and protecting the local environment.”

Hiab has won two John Connell awards previously. First, the Technology Award for the electric MOFFETT truck mounted forklift in 2012, and in 2018, a Quiet Logistics accolade for the benefits achieved when Hiab's customer Pets at Home switched to a fleet of electric MOFFETTs.