Hiab HiVision™: the future is here

Deep, dark forests, vast timber-cutting operations and the loading, unloading and transportation of huge logs. Throughout history, the forestry sector has been an essential part of human industry and is known for the unique demands it places on its workers. While the introduction of machinery including cranes and motorised saws transformed working conditions, it is still a physically demanding and potentially dangerous job.

Now,  the rapid progress of technologies like Virtual Reality (VR), Remote Operations, and even Artificial Intelligence (AI) have led to the development of new products and services that promise to make forestry operations safer and more efficient for its workers.

A NEW WAY OF WORKING

Case in point being Hiab’s ground-breaking HiVision solution. A cutting-edge 3D-control system that uses cameras and Virtual Reality glasses, HiVision offers forestry workers an improved method of carrying out load-handling operations from the comfort of their cabins. Something that has been corroborated by users from across the world.

“I knew nothing about HiVision before I saw it for the first time at the forestry exhibition in Japan in 2016. But after having seen it, it really got me thinking,” says Tadashi Hatakeyama, founder of Furusato Mokuzai Logistics Iwate and one of the first operators of HiVision™ in Japan.

Coming from a family with a long tradition of forestry work, Hatakeyama was quick to see the advantages that the new system could bring his operators especially by improving their safety and comfort.

“In the summer it can be uncomfortable working in the top seat of the crane due to the heat which attracts bees and mosquitos. In the winter, by contrast, it is often cold and potentially dangerous as the operator is quite exposed to the elements,” he explains. “With HiVision™, the operator can now perform all his work from the safety of the truck cabin, without risk or disturbance.”

This, in turn, allows operators to focus on their work leading to more efficient operations, which means more loads, and ultimately, more profitability to the business.

So how does the HiVison work for forestry and recycling cranes? The system uses allows an operator to use VR goggles that are connected to four cameras. By turning one’s head, the goggles automatically switch from the two forward-looking cameras to the two cameras that look sideways.  Together, they present a clear 270-degree view of the work area. This is an improvement over the 240-degree field of vision that an operator normally needs to ensure that no one is approaching the work area.

These goggles allow operators of HiVision cranes to sit inside their truck cabin, as opposed to climbing into a top seat or cabin mounted on the crane column, and operate the crane using joysticks that allows for precise and controlled movements.

“This solution was radical, but we believed in it because it provided an opportunity to move the operator from a risk environment to the safest and most comfortable work environment during loading, which is the truck cabin,” says Toni Ahvenlampi, Product Manager - HiVision™, Forestry and Recycling Cranes at Hiab.

Apart from reducing risk, the introduction of such high-tech solutions has also had the additional benefit of attracting a whole new generation of workers to the forestry sector. Training institutes are seeing rising interest from students who are eager to train on these new systems. 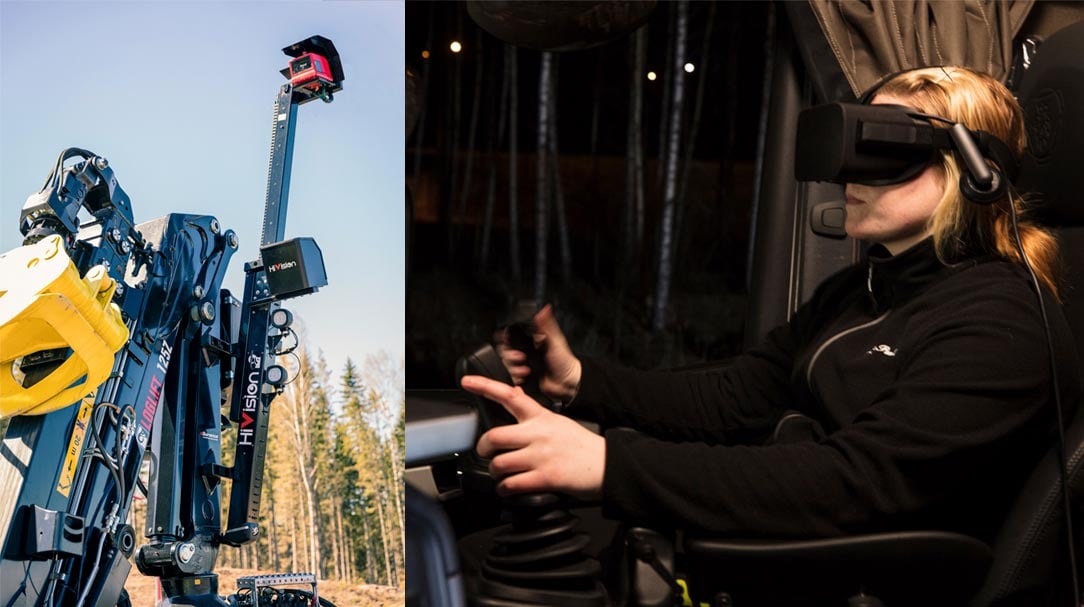 One of the biggest headaches for the timber industry across the world is recruiting new operators. A timber crane operator has a somewhat hazardous, physically demanding job and have to be outdoor in in all-weather, which makes it hard to recruit the next generation.  HiVision provides an all-in-one solution to all these challenges.

The Savo Vocational College in Finland is the first Finnish customer to be supplied with a Hiab LOGLIFT timber crane and HiVision control system. The college also has a HiVision simulator to train students to be comfortable with working on the new system. Trainers at the institute claim the opportunity to use such technology is definitely a big hit with students.

“Some of the students have chosen to study at the college due to the selection of state-of-the-art technological tools present here, which can make operating a crane resemble a computer game,” says Ville Remes, a trainer at the college.

This has proved to be a huge draw with the younger generation as they are able to relate to the industry more easily,” he adds.

HiVision simulators are being used by Hiab in other training institutes and also exhibitions to offer potential customers and operators a first-hand look at the system in actions. The use of such technology has also helped Hiab showcase its pre-eminence in developing advanced technology in what is considered to be a conservative industry.

The HiVision system has also helped level the playing field in the traditionally male-dominated forestry sector by encouraging more women to join the industry.

Sofie Tjus Ekström, a timber-truck driver from Kjell & Aste Åkeri in Sweden is the first woman in the world to operate Hiab HiVision system. So impressed is she by the technology that she almost exclusively prefers to use it to load and unload timber.

“Now it’s not necessary to climb upon slippery, icy logs in the winter. Taking the risk of being near heavy traffic when parked next to a big road is not needed either. Everything can be operated from inside the truck cabin,” she explains.

Ekström’s example has helped draw more women to the sector. In fact, nearly half of her training class was filled with women.

“It has nothing to do with how strong you are. Technology makes it accessible for everyone,” she says.

Buoyed by the success of the HiVision™ in the forestry sector, Hiab sees opportunities for the system to be introduced in other industries as business strive to improve the safety and efficiency of their load-handling operations. Sectors such as construction, mining, and logistics are just a few that could benefit, as owners rush to future-proof their businesses.

“What is interesting to see now is that some of our customers are returning to invest in another HiVision™ crane for their fleet,” says Jukka Soini, Product Business Manager at Hiab. “Many consider their purchase to be an investment that will ensure their success today and in the future.”

The technology needed to suit the needs of these industries is under continuous development, thanks to Hiab’s R&D team. The company also hopes to be able to eventually develop solutions that can enable operators to operate their equipment from a distance, without even getting into the truck.

HiVision can also help productivity and operator safety in stationary installation. As a trial project, the largest forestry association Södra has installed HiVision in stationary cranes to remove logs that have been stuck in their wood chipper. Improving both productivity and safety as production does not have to be stopped and no person has to clear the machine and face the risk of being hit by a wood chips at high speed.

Since its launch in 2016, Hiab HiVision™ has been sold in over 10 markets, including countries like Brazil, Denmark, Scotland, Norway and Slovenia. And in the years ahead, that number is only bound to grow.

HiVision has also been expanded to work with MULTILIFT hooklifts as an Augmented Reality experience.