Seeing is believing – the man who came in from the cold

The HiVision™ 3D vision control system is a true game-changer, moving crane operation to the safety and comfort of the truck cabin. In the long-term, it might even be possible to remote-control several trucks at once, distant from the working site.

Science fiction? Wishful thinking? “Not at all,” says Rafal Sornek, Vice President, Hiab Technology and Quality Development. “Based on the recent advancements in virtual reality goggles, cameras, and connectivity we’ve developed a system with cameras on top of the forestry crane, which enables you to see the working area and operate the crane remotely using VR goggles – the HiVision™ 3D control system, which is unique in the industry.”

Development got off the ground in June 2015, involving an image-processing company focusing on getting a latency-free signal from the cameras to the goggles.

At the first test the development team was impressed. Green-lighted, the project continued, now including a company working on the camera housing design as well as Hiab’s R&D teams in Poland and in Sweden.

Safety was a major concern. “In a traditional crane, the operator needs a 240-degree field of view to see that no one approaches the crane from the side,” Sornek says. “That’s why we decided on four cameras.”

When the HiVision™ operator turns his head the goggle image switches from two forward-looking cameras to two looking sideways. This provides a very realistic view, without moving parts on top of the crane. The cameras are fixed in a relatively small box placed where the operator’s head would normally be.

The decisive test came when professional crane operators were invited to test-operate a crane outfitted with HiVision™. Sornek remembers it fondly: “There was this very sceptical guy who said, ‘No way, you need to be in the crane cabin or top seat, you need to feel the crane operating’. Then he put the goggles on, got into the truck cabin to operate – and we couldn’t get him out. The general operator verdict was that it would work.”

Hiab’s short-term reason for introducing the HiVision™ system was operator safety and comfort, but Sornek has a clear long-term vision. “In the future the operator doesn’t even have to be in the truck, but operates remotely from a distance, saving costs. I’m a strong believer that we rather soon will have driverless trucks on the roads, and it makes no sense to have crane operators sitting on these waiting passively to get to the site. One person could even operate several trucks remotely.”

It also opens up the job market to more people. You don’t necessarily need a truck-driving license, and it could be a perfect job for disabled people.

Another driver for remote crane operation is ever-stringent safety regulations. Sornek says that 3D systems such as HiVision™ might even become compulsory and replace unprotected top seats. “We want to be the safety forerunner in our industry,” he says, “complying with regulations even before they become the actual law.

The HiVision™ system is also closely related to other digital projects. Digitally seeing and recording what you are handling opens up the possibility to reuse and process information in various ways, such as providing evidence of careful handling or controlling where you dropped the load. “I think that there are huge business opportunities, also outside of the forestry crane business,” Sornek says. 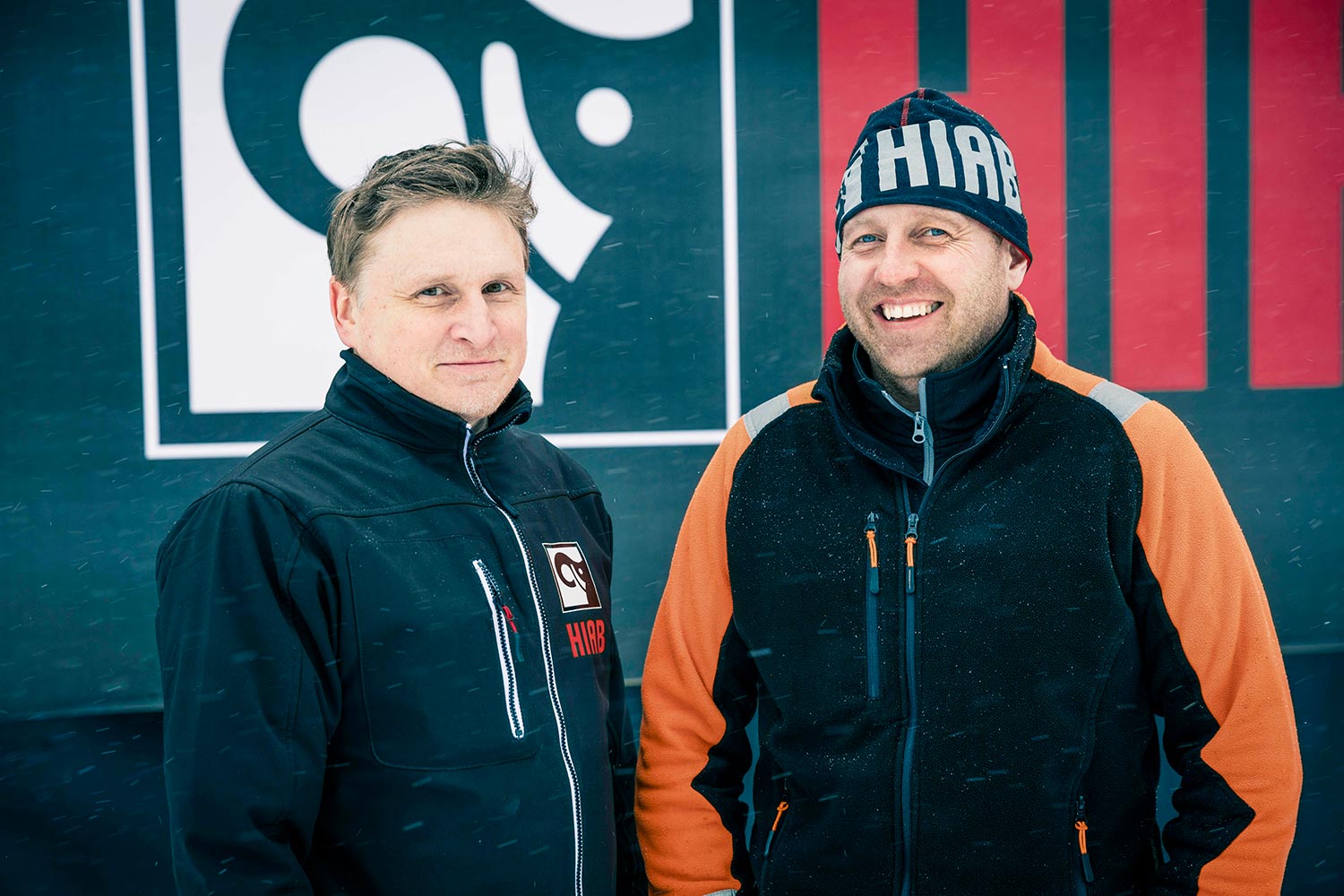 Test driver Henrik Strömbäck (right) says he is impressed by the system. Here together with Hans Lyngbäck, Hiab’s Project Manager for Application & Tools.