A testbed for new technologies

Hiab has opened its new test track for MULTILIFT hooklifts and skiploaders in Raisio, Finland. Find out how this will help Hiab develop new products and services that are reliable, safe and efficient.

If a hooklift truck is parked on a five-degree incline on an icy tarmac, how much can the load weight before loading or unloading becomes too dangerous? Is it possible to develop technology to assist the driver in such difficult conditions or to do all of this autonomously? Questions as specific as these have been impossible for anyone to answer. Experienced drivers may be able to hazard a guess, but there has never been any concrete data available. Until now, that is.

In the town of Raisio in south-western Finland, Hiab recently unveiled its brand-new test track dedicated to the testing of its MULTILIFT hooklifts. Through data gathered by testing scenarios such as the one described above, Hiab aims to improve its products and come up with innovative new solutions.

“This is different to factory testing, which is mandatory and done to all of our products. This is more. This is really thinking how the customer will use the product and how we can really understand the challenges the customer has on the job,” explains Jon Lopez, Vice President of Demountables at Hiab. 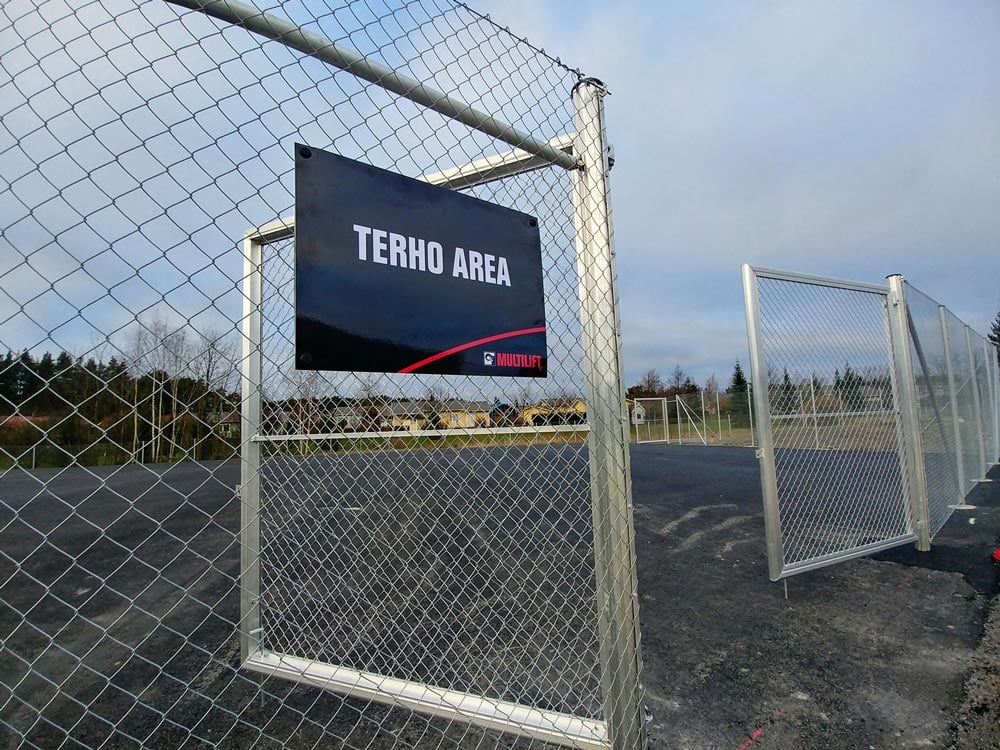 The new test track is named Terho, which is Finnish for acorn. It is also the surname of the brothers who invented the world’s first demountable. Hailing from Raisio, the Terho brothers went into business in 1949, establishing MULTILIFT, a mechanical, cable lift demountable for trucks. In time, the business was merged with Hiab and MULTILIFT became one of Hiab’s top-sellers.

The name, says Lopez, is both a great fit and a tribute.

“Most our brands were started by the original inventors of the products,” he says. “We want to continue this pioneering spirit by investing in innovation that really shapes the industry and creates a revolution in the market.”

Protected by a fence with two locked gates, the test track is spread over 10,000 square meters. About half of it is tarmac and the other half gravel. The tarmac also features an area with a five-degree incline surrounded by large concrete cubes. Trucks can be attached to these cubes so they work as anchors, preventing a truck from falling over. During winter, tests can also be run on ice and snow.

“Something good is finally coming out of the Finnish climate!” exclaims Erkki Ahola, Director - R&D at Hiab laughing. His team of 26 will be the main users of the test track. 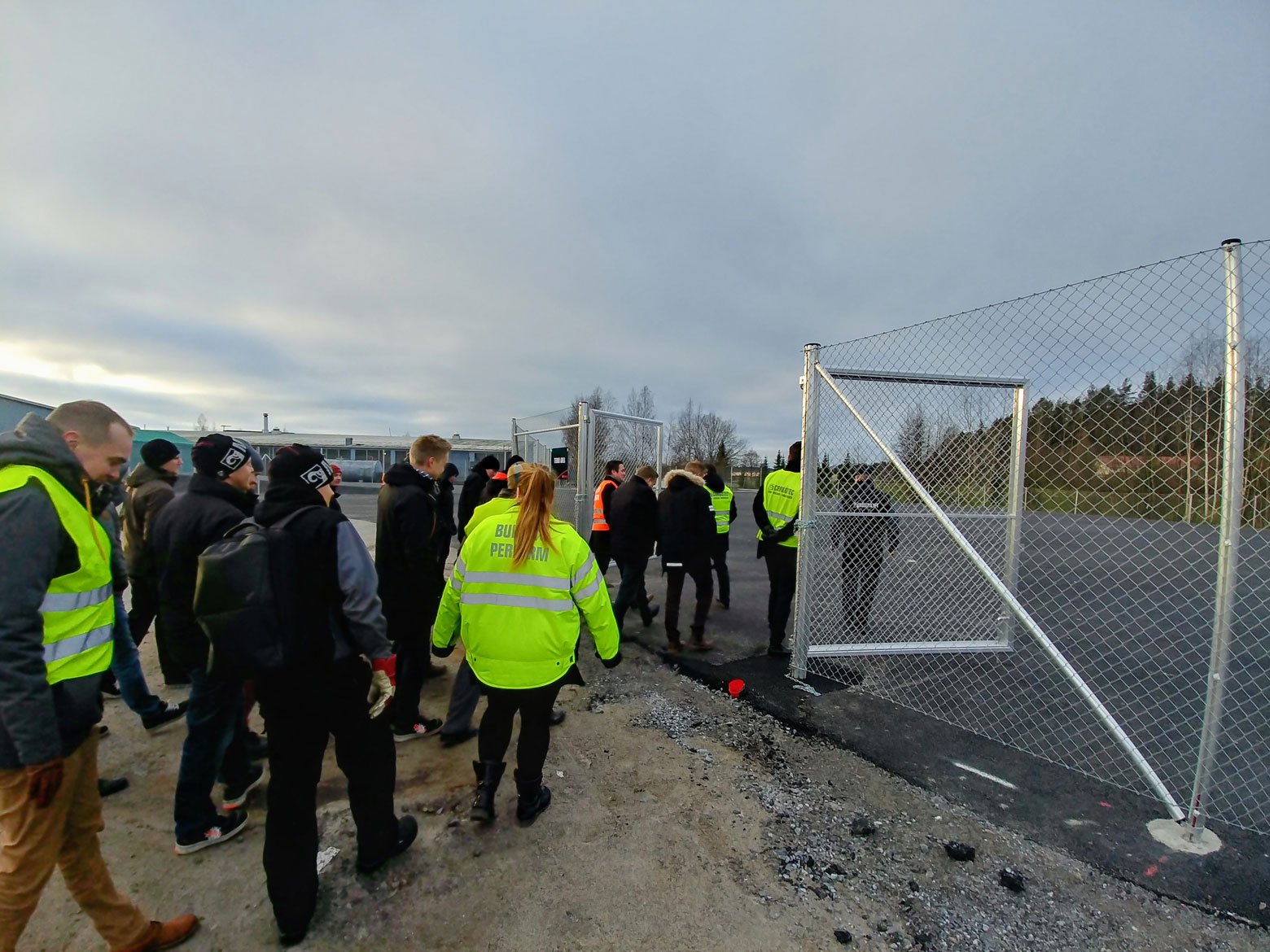 As for the scenario with the hooklift, the incline and slippery surface, Ahola says the data from such test scenarios will eventually help in the creation of smart features that could signal an alert if loading or unloading was being attempted in unsafe circumstances or assist the driver to do it safely. It could also allow him to relax and oversee the Multilift, as it does the work for him. 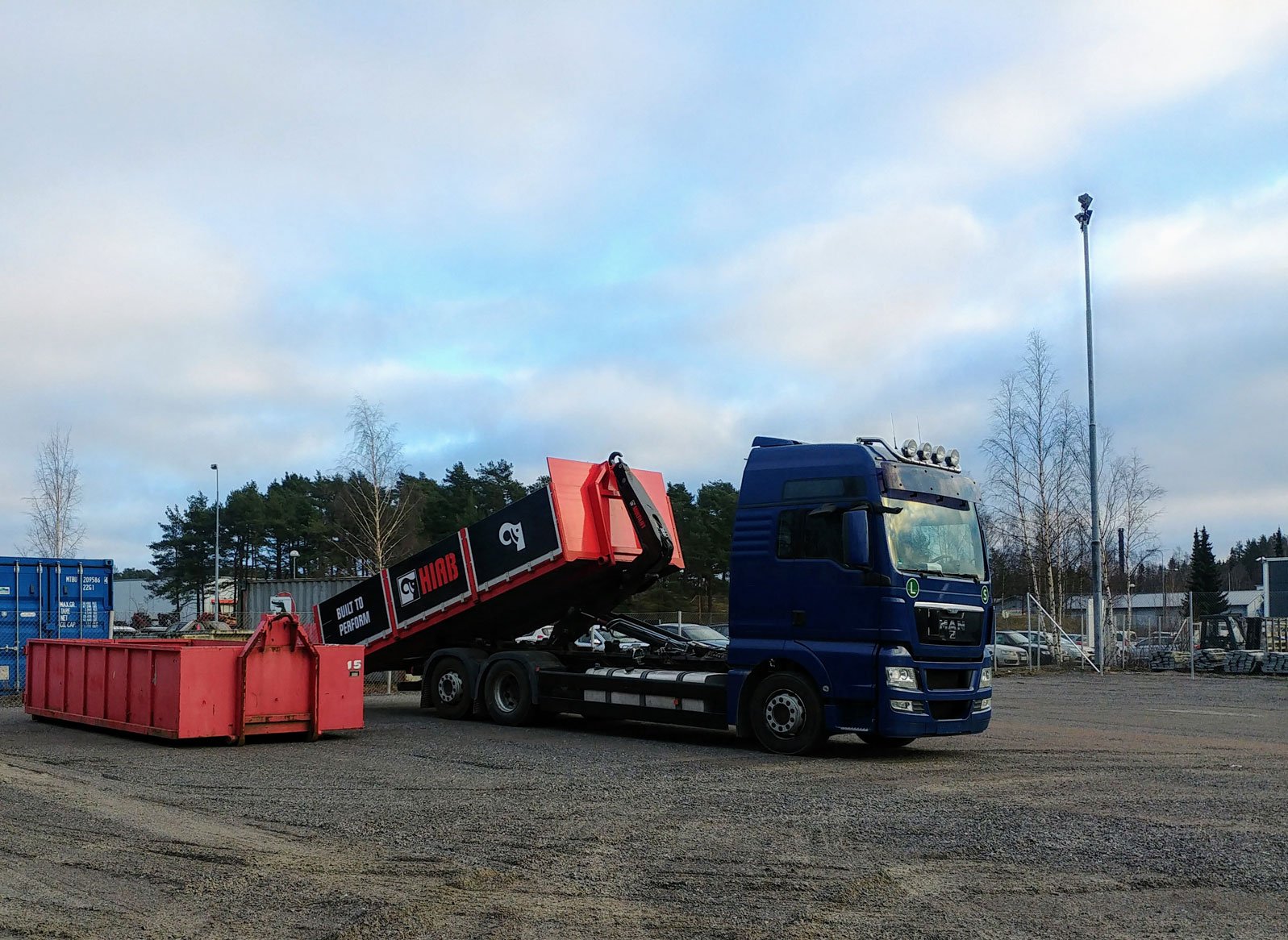 Testing the latest in cutting-edge tech

The safety of both customers and employees is paramount to Hiab and is one of the reasons why the test track was built. It also ensures that unauthorised people don’t have access to testing events, enabling the team to safely carry out tests including those with automatic features.

“Now we can standardise the testing environment,” says Hannu Hyttinen who works in the R&D team. “The data will be more exact and reliable.”

In 2018, MULTILIFT launched a new weighting system. Around 1,300 tests were run just for that one feature. As Hiab continues to invest in innovative, digital technologies, the amount of testing will only go up, making the new track even more essential. Ahola estimates that 80% of his team’s time will be spent on exhaustive tests to ensure that Hiab’s products are safe, efficient, and reliable.

Among the tests that the R&D team has lined up, is the HookliftAssist™, Hiab’s ground-breaking camera-guided control based on Hiab’s HiVision™ technology. They will also a new feature which lets the user control the height of the hooklift when loading and unloading.

“Back in the day, a mechanic could look at the machine and find any fault it may have. Digitalisation makes the user experience simpler but at the same time, problems become harder to fix,” explains Ahola.

This is why the Terho test track is also the where Hiab is testing out next-generation solutions such as the Hiab HiConnect™. Using a combination of Artificial Intelligence and remote sensors, HiConnect™ will allow users to track how effectively their equipment is performing in real-time, and even schedule maintenance and upgrades ahead of time. If a problem occurs, HiConnect™ will also allow Hiab to provide assistance to their customers remotely.

The data from derived from tests conducted here, says Ahola, will be shared with other Cargotec businesses like Kalmar and MacGregor, enabling all of them to further advance their product designs. The future will be built with automation; this is considered both a challenge and an opportunity by all the businesses inside Cargotec.

You never know where the next innovative idea can come from. At the moment, Hyttinen is working on an idea that he had by watching his then 2-year-old son at play. 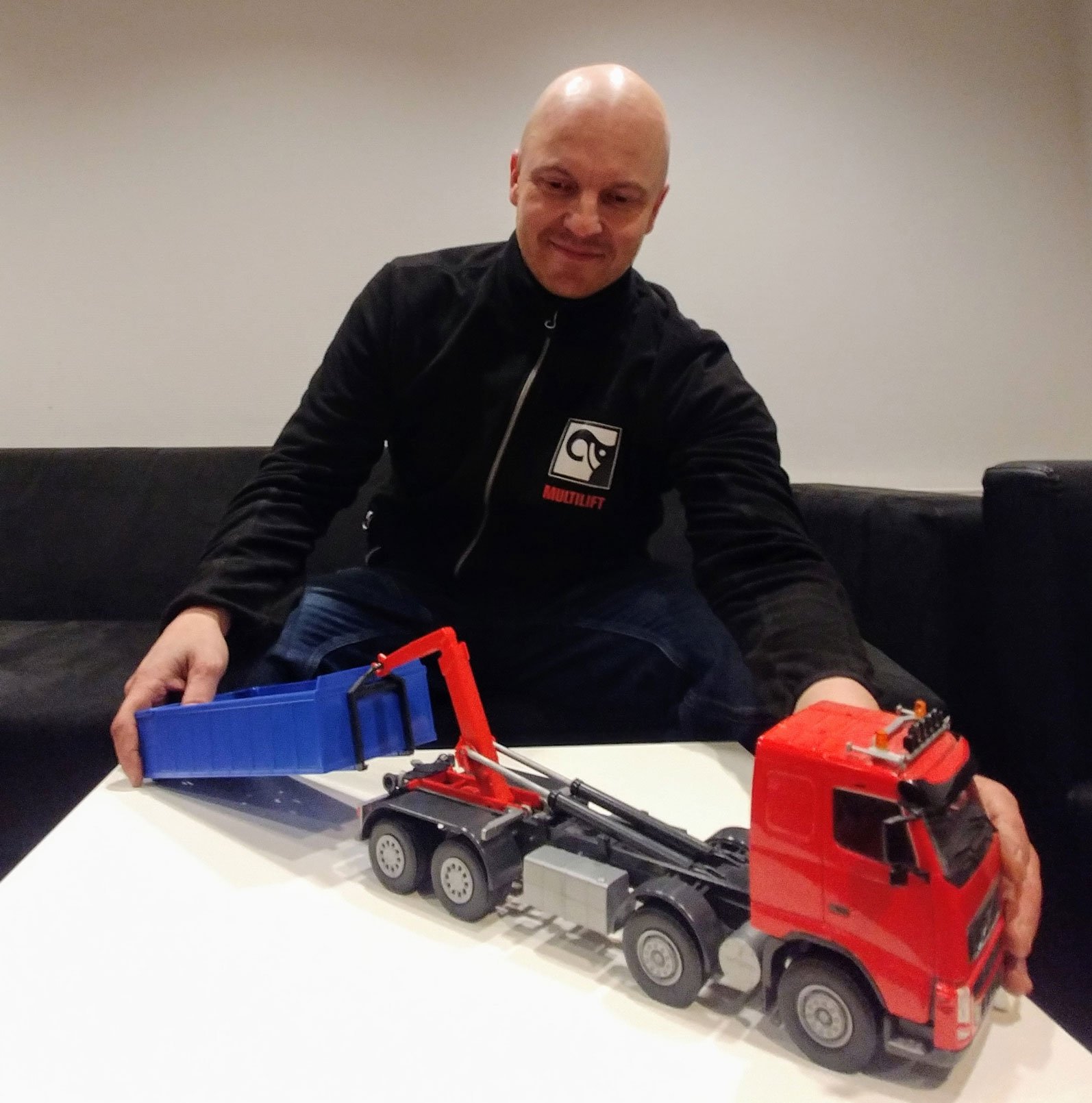 “He was playing with one of these,” he says, showing a miniature version of the MULTILIFT hooklift, “and he was using it in a way I’ve never seen before. This has given me an idea to use it a totally new way.”

That’s all Hyttinen is willing to reveal for now. The idea needs further testing and refinement before he can say more. Thanks to the new Terho track, he and his team now have the perfect space to test this and other new innovations. 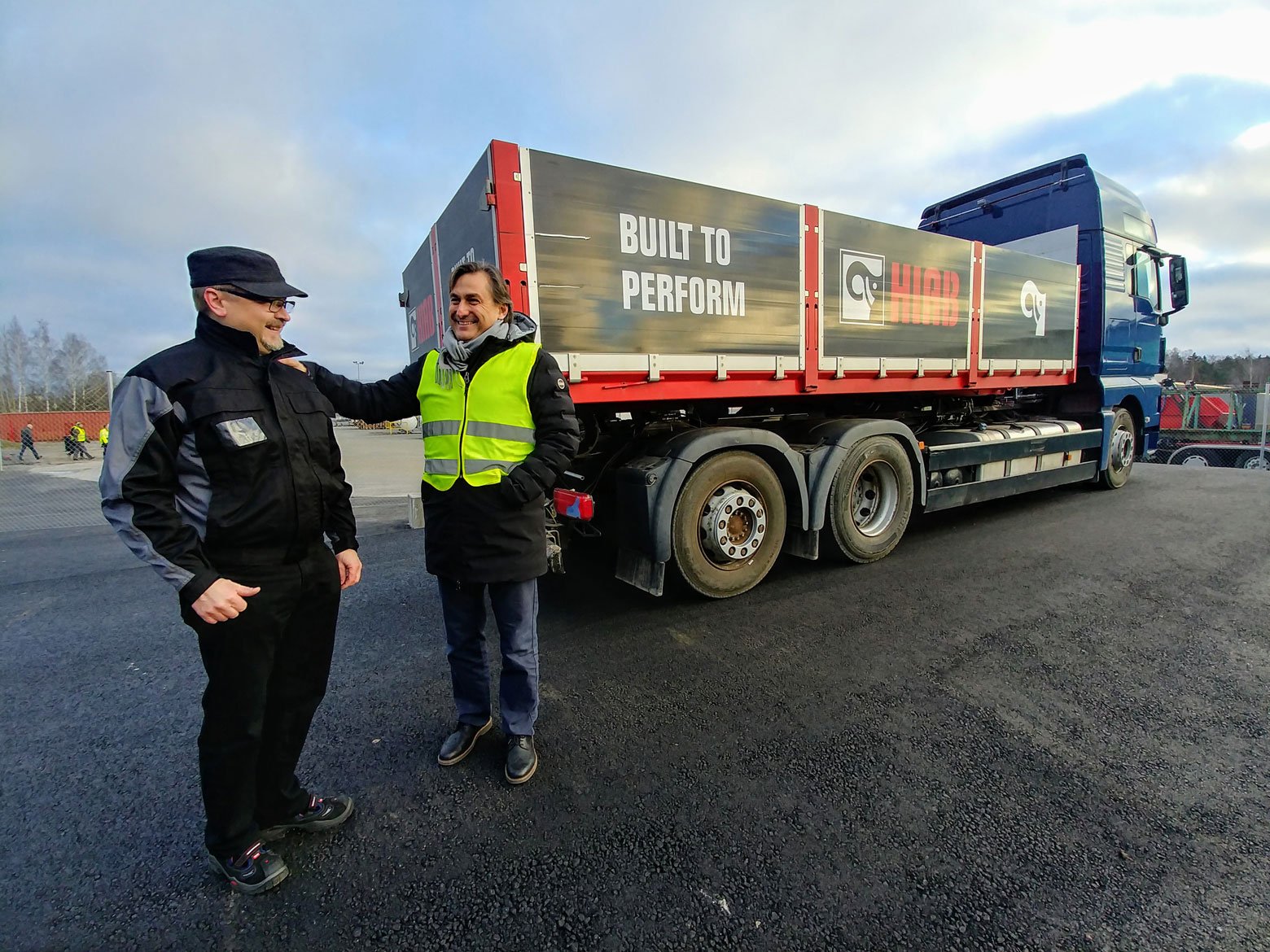