This latest Hiab model features the all new V12-Power boom profile. V12-Power means a lighter, more stable boom profile which minimises deflection, even over the impressive 42 metres vertical reach. With nine extensions on the second boom, another six on the 155Q JIB and one manual extension it has the longest reach in it’s class. This impressive package comes in the same size as most 90tm cranes.

As you will expect from Hiab, the crane can be complimented with a full FrameWorks package. The new 1100 series subframe has a built height of just 170mm under the body, allowing for a very low build deck, but still provides the stiffness needed for optimal performance of systems like Variable Stability Logic Plus (VSL+). This means that a smaller size of auxiliary stabilisers can be used with this subframe giving a smaller footprint at the job site.

Last but not least, technical performance should of course be completed with strong industrial design.  In close cooperation with the customer; Van der Sluis Transport, our engineers and mechanics at the Hiab Factory Installation Center in Meppel crafted this stunning Scania truck. A low deck height, numerous amounts of stainless steel storage boxes, many accessories and a stunning paint job has resulted in this masterpiece.

A true first of its kind proving Hiab’s ability as a full solutions provider.

Further information about Hiab FrameWorks and the Hiab iQ.1188 HiPro 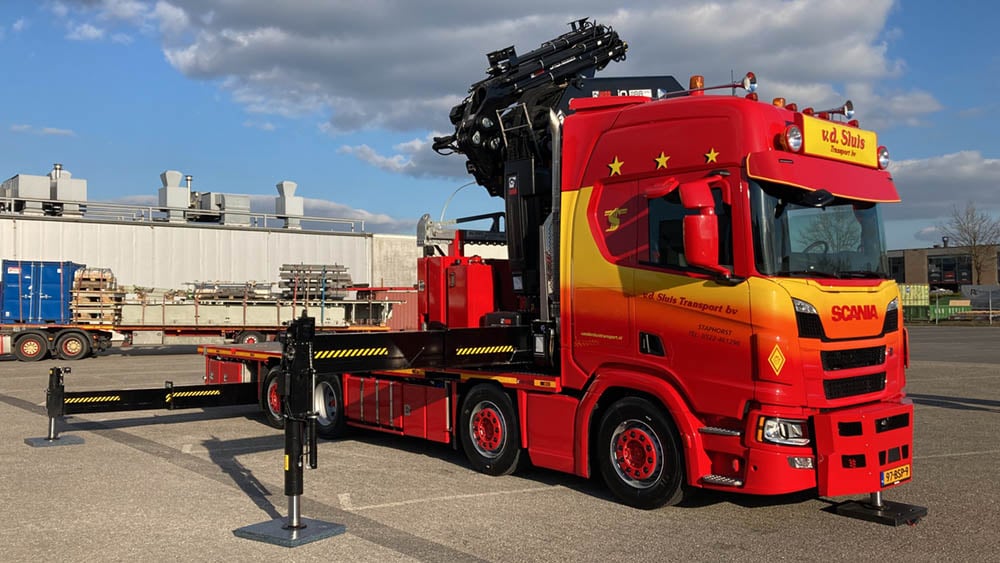 The Hiab iQ.1188 HiPro with subframe and auxiliary stabilisers