Many may already be familiar with the Swiss Army Knife - the multifunctional tool that can be taken anywhere. For the British Army this analogy rings true for their demountables.

The British Army who use the Rheinmetall MAN Military Vehicle (RMMV) HX range based on the MAN TG heavy truck range has been using the MULTILIFT load handling system since the 1990s.

The partnership started with the Demountable Rack Offload load and Pick-up System (DROPS) vehicles which were a military version of the commercially available MULTILIFT hooklift. Developed during the Cold War in the mid-1980s in the event of a European conflict and introduced into service in the early 1990s. The hooklift would be used to rapidly supply large quantities of equipment to the Royal Artillery and Royal Engineer Regiments operating in the Northern European theatre.

The vehicle platform, which was built to the ISO container 20-foot standard, ensured that army supplies placed in containers could be unloaded and replenished quickly and efficiently and was seen as a flexible solution for improving logistics capability.

To improve costs associated with the operational service in Iraq and Afghanistan in 2008, the DROPS vehicle system was complemented with a new alternative - the Enhanced Pallet Loading System vehicle (EPLS) and the DROPS option was eventually fully retired in 2020.

Tim Cookson, Sales Manager for Hiab’s Government Business Operations (GBO), outlines the biggest advantage with EPLS over DROPS;  “EPLS can pick up and drop a container in any location that the truck can access, without the requirement for infrastructure such as a port crane or heavy forklift truck to lift it on or off a flat rack. If collecting from a location with overhead container lifting equipment or heavy forklifts, the container can also be dropped on to the EPLS vehicle, secured by twist locks and driven off in the normal way. The container handling frame can then be attached to the container while it is on the vehicle and it can be offloaded by the hooklift, or vice versa. This impressive capability gives the military logisticians ultimate flexibility, and saves on time, manpower and resources.”

In 2018 Hiab launched its civilian version of EPLS, the MULTILIFT Commander which is available in two lengths for 6x4 or 8x4 rigids. Cookson further comments;

“the MULTILIFT Commander is suitable for applications including: emergency, fire, and rescue services; special logistics applications; greenfield infrastructure projects; and factory-to-terminal transportation from remote sites. Unlike EPLS, the MULTILIFT Commander can lift ISO containers weighing up to 16.5 tonnes, thanks to the lighter tare weight of a civilian vehicle.”

You can find further information about the MULTILIFT Commander here

The MULTILIFT MSH165SC with Enhanced Pallet Load System (EPLS MK3) as used by the British Army. 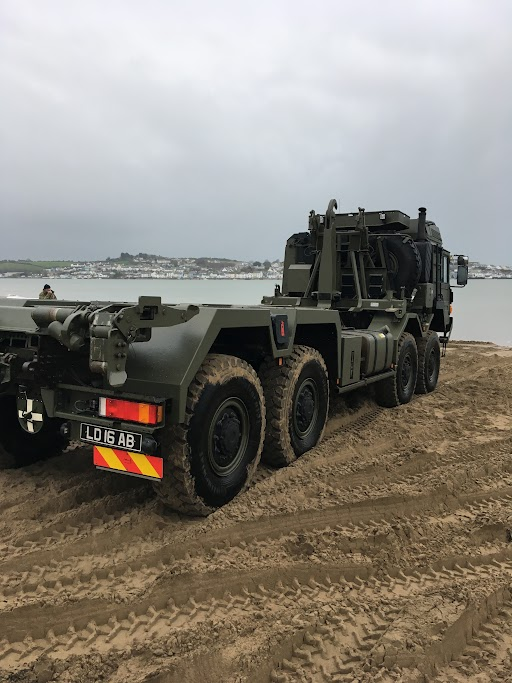